This is one of the basic ideas that are commonly not understood properly, we learn this from the high school level. Currently, most of the exploration is going back to basics and wondering why they are defined like that. I can see that most of the definitions have mathematical backgrounds and general theorems or axioms present, which I'm trying to understand more now. Here I want to see what’s the intuition behind the Random Variables.

A Random variable / Random Quantity/ Stochastic Variable is described as a variable whose value depends on the outcomes of a random phenomenon.

Definition based on Measure Theory is more intuitive,

Random Variable isn't a variable, it's a function which maps objects to real valued line.

The definition of a Random variable in Formal Mathematical term is defined using Measure Theory, It seems measure theory based intuitions are easier to connect rather than statements which define the random variable. Usually, we remember things if we can associate them with some real-world entities or actions, which is more intuitively we can recollect when we want to restate or understand other similar concepts. I’m trying to wrap around this basic idea using measure theory.

Very generically we can say, Measure can be explained using the Set Theory from the Wikipedia article is very apt here.

Measure on a Set is a systematic way to assign a real number to each suitable subset of a set.

Measurable Events: We can group those set of events that can be measured or quantified by using some units that we are familiar with. 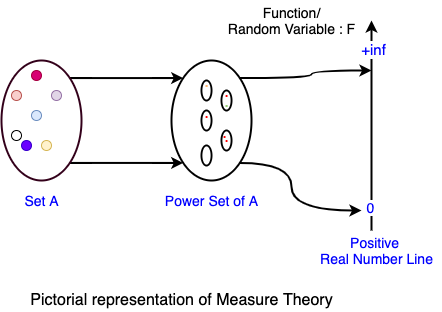 Here Set A can be anything ( eg; all people in the world, space in physics, number of atoms in the universe ), that we are trying to understand. Power Set of Set A includes all elements in Set A as well as all combinations of items in Set A including the null item.

Assigning a real number to all these subsets of A is called Measuring. We can do any type of measuring activity that is possible on the Set A or the measuring that's important to us. For example, to understand the heights of all humans in the globe, we do Measure their height, here the measuring is finding the height of each and every person and map that to a real line with some unit.

I was wondering, why the Measure was defined like this, why the intermediate set ( power set of A ) required here ?, why note map the initial set A to the real number? What I'm able to reason here for these questions are,

An Algebra on a Set is a collection of subsets closed under Union and Intersections.

An σ-Algebra on a Set is a collection of subsets closed under countable unions and Intersections.

What's mean by closed is that, if we take any two items from the given set and we do the specified operation (union or intersection), the result also available in the same Set.

The Countable union or intersection means, we can associate natural numbers to the subsets of a given set, ie; a bijective nature in the mapping. Another side of it is, all the subsets are not measurable, as it wouldn't follow the constraints of σ-algebra, Hence σ-algebra is a special constraint applied on a Set to define the Measure and Measure space.

Based on some constraints applied on how we can do the measuring or what to measure we can group the Measuring to different types of measures that are common for a particular domain,

This abstract notion helps to understand the entire Measure space and its characteristics.

Probability Space also formally defined by the triplet same as above, but the elements are named differently, as,

Here you will be wondering how the probability function ensures the mapping is between 0-1 ?, this is being ensured by the proper normalization factor, if the sample space \(\Omega\) is fully tractable, then that can be used, or only approximation works there.

Why \(P(\Omega) = 1\), this can be explained by applying the rule of \(\sigma\)-algebra, the functions should support, countable union,

A random variable is not a variable but a function that maps from space to the real number domain. So we can see that Random Variable is a measure done on a specified Measure Space.

So it's clear that we can pick, any measurable function as a random variable. Few constraints applied there are

If we are dealing with the probabilities of outcomes of an event, then we can represent this entire experiment using the probability space definition.

A: Only thing here random being important is, at measure time we shouldn't be biased on any specific type of subsets for measuring. So the process of measuring has randomness, hence we call this a random variable.

Let's take one example experiment, where we consider all humans as our Measure Space

From Wikipedia, Probability Distribution is a mathematical description ( or summary) of probabilities of events, subsets of the sample space. These descriptions are represented as a function.

Putting it in another way: Probability Distribution is a function that gives probabilities of occurrence of different possible outcomes for an Experiment.

IMO, This idea came because, after seeing different probability spaces ( or outcomes of different experiments ) we were observed surprisingly have a common pattern. From this, we have an abstract meta function that describes the behaviors of a random variable.

There are two key principles around this,

The measuring process is shown below,

It's not humanly possible to measure all 7+ Billion people's height to get an idea about how it distributed. So this will be done by taking samples randomly from different locations, and repeat this process till we feel the measure is consistent enough or showing convergence properties. ie; the overall properties of the measure ( probability distribution ) isn't changing considerably after N ( finite sample ) measures.

An Average of Random Variable's distribution tend towards Normal Distribution ( Bell curve ) if we do measure/sample an infinite number of times.

This observation comes empirically. The averaging operation actually bringing the distributions of different independent and identically distributed (i.i.d.) random variables centered around the global average or Population Average. This is where the CLT has some relation to the Law of Large Number discussed below, which covers the Expected Value of a Random Variable will be stabilized when we sample/measure enough number of time from the event space.

Sample Mean is the set of events we have measured ie; Random Variables.

In the above measure of height, we can consider there is an unknown population mean \(\mu\) and population standard deviation \(\sigma\). We are doing this measure to find this population mean and variance or other properties of the height (\(H\)) random variable. So from the event space, we randomly pick N number of people and measure the height, ( N maybe 1000, or 1Million or so ).